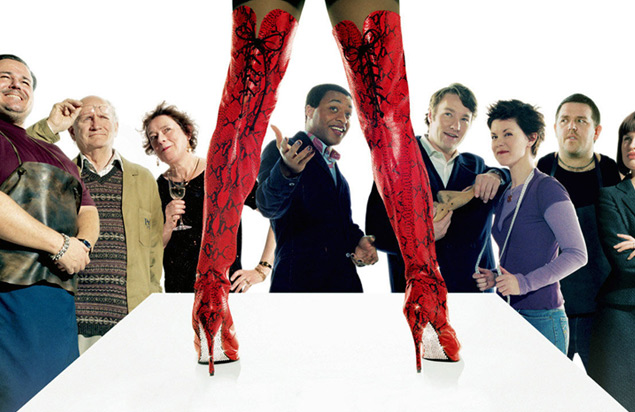 Screenings, which begin Aug. 27, include “Kinky Boots,” “Matt Shepard is a Friend of Mine,” “Liz in September” and more

BETHLEHEM, PA--- “Matt Shepard is a Friend of Mine,” “Liz in September” and “The David Dance” are among the award-winning films being showcased in the 4th Annual LGBT Film Series at SteelStacks, set to kick off Aug. 27 with a screening of the Golden Globe-nominated “Kinky Boots.” This year, TD Bank, America’s Most Convenient Bank, has partnered with ArtsQuest and its partners, allowing the nonprofit community groups to expand the film series to eight screenings, most in the series’ history. Tickets for all films are on sale now at steelstacks.org and 610-332-3378. "At TD Bank, we are proud to promote equality and empower positive change by supporting organizations that offer meaningful opportunities to celebrate the LGBT community," says Eileen Holmes, Market President, Retail, TD Bank. "The ArtsQuest LGBT film series brings awareness to causes that are important to all who are members and allies of our local LGBT community and helps to actively foster a culture of diversity and inclusion." The LGBT Film Series, which takes place Aug. 27-Oct. 4, will feature films such as “Liz in September,” which won Best Film at the 2015 Miami Gay and Lesbian Film Festival; and “The David Dance,” which earned Best Men’s Feature at the 2014 Long Island Gay and Lesbian Film Festival and Best Narrative Feature at the Tallgrass International Film Festival in 2014. On Aug. 27, the series will get underway with a showing of “Kinky Boots,” the 2005 film that inspired the Tony Award-winning musical of the same name. Prior the screening, TD Bank will also host a special pre-screen reception in the ArtsQuest Center for film attendees. On Sept. 17, the LGBT Film Series will show “Matt Shepard is a Friend of Mine,” which tells the story of University of Wyoming student Matthew Shepard, who was tragically murdered in October 1998. The film has won numerous honors, including Best Film at the Cleveland International Film Festival and Best Documentary at the Inside Out Toronto LGBT Film Festival. The film series will also present the short films “Gay Pioneers” and “The Next Stop” on Sept. 30, followed by a talkback with “Gay Pioneers” Executive Producer Malcolm Lazin and Adrian Shanker, Executive Director of the Bradbury-Sullivan LGBT Community Center. Designed to raise awareness of LGBT Issues, the LGBT Film Series is made possible thanks to the support of TD Bank, as well as Pride of the Lehigh Valley and Bradbury-Sullivan LGBT Community Center. Tickets for each film are $10 regular admission, $8 for ages 60 and older and $7.50 for ArtsQuest Members. "Bradbury-Sullivan LGBT Community Center is pleased to partner with ArtsQuest and TD Bank to present this exciting lineup of LGBT-themed films on an array of topics of importance to the LGBT community," says Shanker. “Since launching in 2012, this film series has played a key role in promoting diversity throughout our region.” The complete schedule is: Aug. 27, 7:15 p.m.: Kinky Boots Aug. 31, 7:15 p.m.: The David Dance Sept. 13, 7 p.m.: Liz in September Sept. 17, 7:15 p.m.: Matt Shepard is a Friend of Mine Sept. 21, 7:15 p.m.: Transgender Short Films presented by Gender Reel Sept. 27, 7 p.m.: Appropriate Behavior Sept. 30, 7:15 p.m.: Two Short Films: Gay Pioneers/The Next Stop (includes talkback following film) Oct. 4, 7 p.m.: Do I Sound Gay?

The Frank Banko Alehouse Cinemas are located in the ArtsQuest Center at SteelStacks, 101 Founders Way, Bethlehem. For more information on the series and films, visit steelstacks.org.