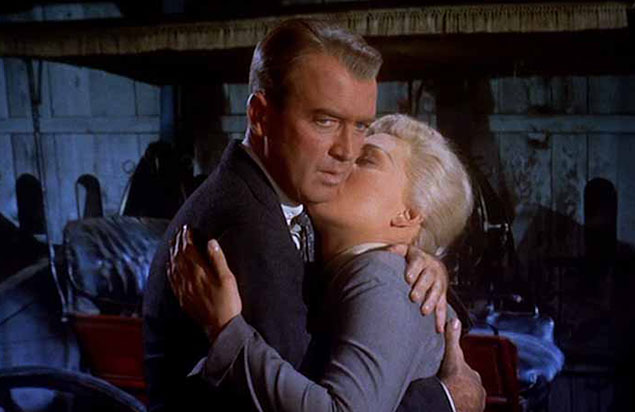 Join Kutztown University Professor Bob Kilker for an informal discussion on Alfred Hitchock's Vertigo. Dismissed when first released, later heralded as one of director Alfred Hitchcock's finest films (and, according to Hitchcock, his most personal one), this adaptation of the French novel D'entre les morts weaves an intricate web of obsession and deceit. It opens as Scottie Ferguson (James Stewart) realizes he has vertigo, a condition resulting in a fear of heights, when a police officer is killed trying to rescue him from falling off a building. Scottie then retires from his position as a private investigator, only to be lured into another case by his old college friend, Gavin Elster (Tom Helmore). Elster's wife, Madeleine (Kim Novak), has been possessed by a spirit, and Elster wants Scottie to follow her. He hesitantly agrees, and thus begins the film's wordless montage as Scottie follows the beautiful yet enigmatic Madeleine through 1950s San Francisco (accompanied by Bernard Herrmann's hypnotic score).

After saving her from suicide, Scottie begins to fall in love with her, and she appears to feel the same way. Here tragedy strikes, and each twist in the movie's second half changes our preconceptions about the characters and events. In 1996 a new print of Vertigo was released, restoring the original grandeur of the colors and the San Francisco backdrop, as well as digitally enhancing the soundtrack.

It was declared the greatest film ever made in the 2012 British Film Institute's Sight & Sound critics' poll, dethroning Citizen Kane who had help the top spot for 60 years.

Vertigo is available to stream on Amazon from $3.99 on. Bob Kilker is an Assistant Professor of Film and Media Studies at Kutztown University. He has a Ph.D. in English, focusing on film and popular culture, from Lehigh University. Since 2012 he has hosted the Tuesday Talkback film discussion series at the Frank Banko Alehouse Cinemas at SteelStacks.