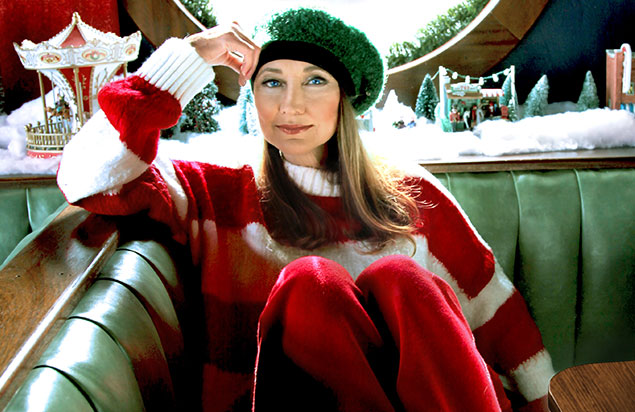 As the child of Country music royalty, Pam Tillis was determined from a young age to find her own way in music as a singer and songwriter. After many false starts with her own recording career, including a pop single on Elektra and 1984’s “Above And Beyond The Doll Of Cutey” for Warner Brothers, Tillis came to the attention of Tim Dubois who headed up the Nashville office of Arista records. After much soul searching, Tillis made the commitment to make an honest country record. The album “Put Yourself In My Place” yielded 2 number ones, 2 top five singles, and one top twenty hits and in its first year the album was certified gold. Tillis followed with 3 platinum albums on Arista “Homeward Looking Angel” in 1992, “Sweethearts Dance” in 1994 and an Arista “Greatest Hits” in 1997. Tillis achieved 6 number 1 songs during this time including “Shake the Sugar Tree”, “Mi Vida Loca”, “When You Walk In The Room”, “In Between Dances” “Don’t Tell Me What To Do” and “Maybe It Was Memphis” while 14 of Pam’s other singles landed in the top ten and top twenty.

Pam Tillis fell in love with music at an early age. Band, chorus, talent shows, church and the creative community of Nashville all helped to shape the young singer. Growing up, Pam was in a variety of bands, spanning from jazz and alternative country to top 40. She sang demos and lent her voice to many national jingles including Coke, Country Time Lemonade and a Coors Silver Bullet with country superstar, Alan Jackson. At the same time, Tillis worked as a staff writer for Elektra Asylum Publishing and later took a job writing for Warner Brothers Publishing, which resulted in her songs being recorded by some of the biggest names throughout all genres of music, including artists like Chaka Khan, Juice Newton, Dan Seals, Gloria Gaynor, Conway Twitty and the top ten “Someone Else’s Trouble Now” for Highway 101.

Pam has performed on the stages of Broadway in New York, modeled on the pages of Glamour Magazine and is a proud member of The Grand Ole Opry. Some of Pam’s most memorable award moments are being a 3-time CMA award winner including the prestigious 1994’s Female Vocalist Of The Year Award, and being nominated multiple times for Grammy’s Best Female Country Vocal Performance in 1993 for “Maybe It Was Memphis, in 1996 for “Mi Vida Loca” and in 1998 for “All The Good Ones Are Gone”. Pam is also proud to be a 9-time Academy of Country Music Award nominee, a 2-time Grammy award winner and 6-time Grammy nominee, and an American Music Award’s nominee. Most recently, Pam has celebrated an IBMA award win in 2004 for Recorded Event Of The Year “Livin’ Lovin’ Losin’” and most recently a 2012 IBMA Song Of The Year nomination for co-writing, Dale Ann Bradley’s “Somewhere South Of Crazy”.

Though Pam has rolled easily with the tides and has drawn something from every new twist the ever-changing country music world has shown her, Pam Tillis has always insisted on writing and cutting songs that speak from the soul. The results have been records that emanate an almost painful beauty. With more than 30 singles charting on US Billboard charts, 10 studio albums including her favorite, the critically acclaimed 2002 “It’s All Relative” (a tribute to her father, the great Mel Tillis), and 3 other releases “Rhinestoned”, “Recollection” and “Just In Time For Christmas” off her own label, Stellar Cat Records. In 2012 Red River Entertainment released ‘Dos Divas’ a Country Duo album with fellow superstar Lorrie Morgan under the name Grits and Glamour.

Whether it’s on the elaborate stages of the Grand Ole Opry or in the intimate setting of Nashville’s Bluebird Cafe, you will experience that feeling of delight that comes from Pam Tillis singing exactly what she is meant to sing at that moment. Pam Tillis’ star continues to shine brightly in the 3rd decade of her career and is currently touring extensively on her own as well as with her “Grits And Glamour” tour partner, country star, Lorrie Morgan.