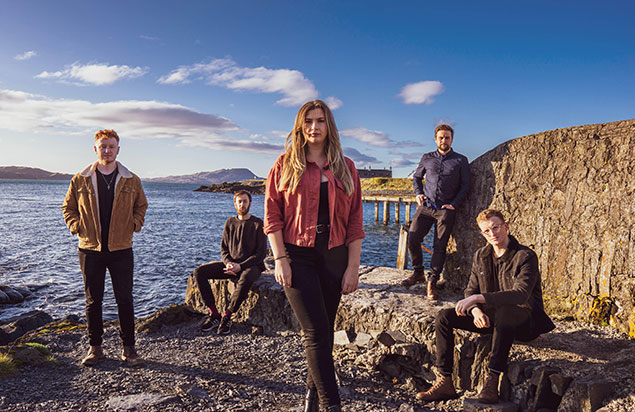 Heron Valley are an energy fuelled, traditional band from Scotland. Their roots lie in Scottish and Irish traditional music, including traditional Scots song and Scottish piping tunes and irish banjo. The five-piece group comprises Abigail Pryde on Fiddle and Vocals, Keith Morrison on Keys, Nick Hamilton on Banjo and Guitar, Alastair Maclean on Bagpipes, Flutes and Whistles, and Callum Cronin on Bass and Guitar.

Their inception as a folk band began in 2014, after spending the first few years of their musical careers perfecting their craft as a young ceilidh dance band. In 2018 they formed the line up you now know, when they embarked on their first tour of the USA.

Coming from vastly different areas of Scotland ( Oban, Lewis, Cowal, Glasgow and Stirling ) you are sure to hear an excellent story or two from Heron Valley, and maybe even some Scots and Gaelic language lessons!

In 2015 the band released their first single and music video, a set of tunes, ‘Pressed for Time’. The storyline takes the band from performing out on a moving boat on the beautiful Loch Fyne in Argyll, to their journey to and performance at a gig in a local dance hall. This was extremely well received and racked up 85K views, with people all over the world purchasing the single.

A year later, they released their second single and video ‘Home’. This time, they set off at 3AM to climb up Beinn an Lochainn, a hill in the west coast of Scotland residing beside the Rest and Be Thankful, a stunning area with many a story itself. The video sees this journey from bottom to top and shows them playing on cliff edges in the beautiful area where Abigail grew up.

From this, the band set off to the USA and EU and continued to release more music including their debut album ‘Roam’, single ‘Take You There’, single ‘Springburn, just shy of Ireland’, and EP ‘ Erie Storm’.

The lineup consists of: