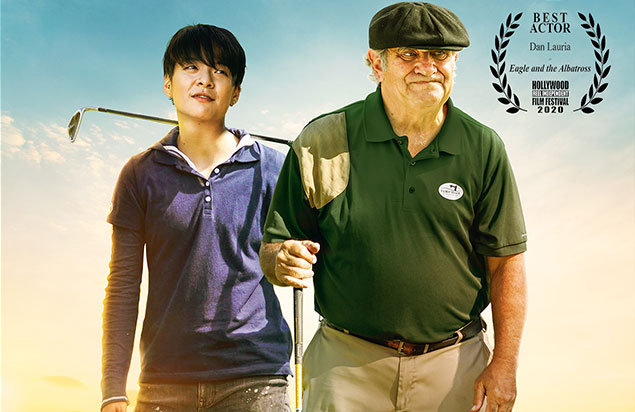 Eagle and the Albatross

When an orphaned half Korean girl finds herself in small town America with her only living relative, she seeks out a mentor to help with the only things she loves - golf. The best player in town, the widowed optometrist, takes her under his wing, sending them on a journey to face their fear of losing loved ones and their game.

This screening will be followed by a Q&A with the writer/director Angela Shelton.

Angela Shelton is an award-winning filmmaker, who began her screenwriting career with Tumbleweeds that received the Sundance Film Festival Filmmaker’s Trophy and earned actress Janet McTeer an Academy Award® nomination and a Golden Globe® win and placed Angela on Variety’s Top Ten Screenwriters to Watch.

After she adapted Kaye Gibbons’ novel Charms for the Easy Life starring Mimi Rogers and Gena Rowlands for Showtime Angela made her directorial debut with the multi-award-winning documentary Searching for Angela Shelton. Her memoir, Finding Angela Shelton, describes how making the documentary changed her life. Committed to helping others, Angela travelled the world as an internationally recognized public speaker raising money for rape crisis centers and domestic violence shelters. She collaborated with trauma informed care providers to create a healing program to help abuse survivors move on from trauma.

Angela came back to filmmaking with her first feature film THE HAMMER that she wrote, directed, and produced, about the true story of a prison boxer who turns down a chance for freedom to fight in the 1984 Olympics. She followed it up with a tear-jerking comedy, Eagle and the Albatross, about an orphaned Korean girl who seeks a mentor in a country golf club full of misfits and discovers an unlikely family.

Angela balances her time working in Los Angeles and New York City while living in the country.